During the Berlon Workshop im Oktober 2002 in Berlin I decided to get deeper engaged with wireless community networking. In March 2003 Ingo Rau, Iris Rabener and I went to visit the Copenhagen Interpolation, the next European event on wireless community networks, which was hosted by wire.less.dk. This was the true hour of birth of freifunk.net. Cause while being in Copenhagen, we spontaniously decided to organize a follow-up in Berlin …

“In most countries on our planet there were already a number of non-profit initiatives who built wireless community networks. With powerful antennas some of their accesspoints were connected to create network islands that were growing like water lilies. To meet and talk from 12. – 14.09.03 freifunk.net organised the first freifunk.net Summer Convention in Berlin for all lovers of free wireless access. Of the many highlights were the mesh workshop, the presentation of the mtx1 mesh router, the discussions, the djursland cantenna, the launch of the berlin backbone and a lot of mate tea based drink called club mate. About 100 participants took the 3 days trip on the space ship c-base.”

Bruno Randolf gave a short introduction on various mesh routing protocols, especially aodv, mobile mesh, scouter und meshap. After some theory, people were asked to install mobile mesh on their laptops, put their wireless cards into ad-hoc mode and form a long queues of over 10 people. Tomas Krag’s Laptop at one end of the queue was acting as the internet gateway inside the c-base. The other end of the queue was outside the building almost 1000m away. Now people from that end could connect to the internet over the 10 hops of people’s laptops. The connection was very slow, but a ping worked! Then at the end of the presentation, Bruno introduced the first linux based mesh router prototype from 4G Systems: 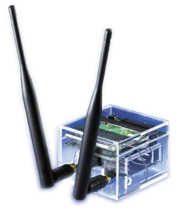 The Smartest Mesh Network Ever

During FSC03 Julian Priest (the creative inventor) and Tomas Krag (the formalist) introduced the Playing Card Based Routing Protocol – a human intelligence based implementation of RFC 2822 message protocol combined with the smartest mesh network ever. Here is a picture from the archives: 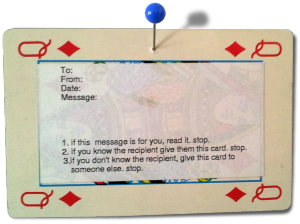 It was very impressive how people made extensively use of these playing cards during the whole convention. It really helped them understand the basics of a message protocol and a routing protocol. Together with the Pico Peering Agreement (PPA) which we had printed on the last page of all the programm flyers, people really got the picture of a buttom-up meshing infrastructure. There is a rumor that one of the playing cards made it from a participant of FSC03 to his friend in Turkey through one of the many Berlin kebab stores …