The AirJaldi Summit held in Dharamsala, India, on 22–25 October, 2006, addressed some of the ways in which wireless solutions can be used to provide affordable Internet access in rural communities. The conference focused on the advantages that wireless networks can provide through, among other things, enhancing the quality of education, governance and health-care, increasing economic development, and promoting cultural exchange.

During Airjaldi Summit I got to know Laura Drewett. She came to Dharamsala with a well prepared set of training material and gave a workshop on the economic impacts of running local ICT infrastructure as a business. Due to some changes in the initial schedule we suddenly had some extra time and as I finally saw a chance to bring in both my community view plus my business experience, we agreed on writing a chapter about the econimics of wireless community networks for the second edition of the free book Wireless Networking in the Developing – http://wndw.net.

After a visits of Julian Priest, Adam Burns, James Stevens, Armin Medosch and other free network activists from consume.net (London), and Sebastian Büttrich und Tomas Krag from Copenhagen in Berlin in October 2002 there have been a series of greater international meetings

Quote: “While meeting in Djursland people from Asia and Africa asked, whether we could organize such a meeting outside US or Europe? Many of us thought: Why not?! “In Djursland last year, during ‘Fresh Air, Free Networks 2004’, Juergen mentioned the idea of a ‘World Summit on Free Information Infrastructures’, and after we had a good laugh at how grand it sounded, everyone took it seriously.”
[ Saul Albert after the WSFII prepconf in London, Oktober 2005.] 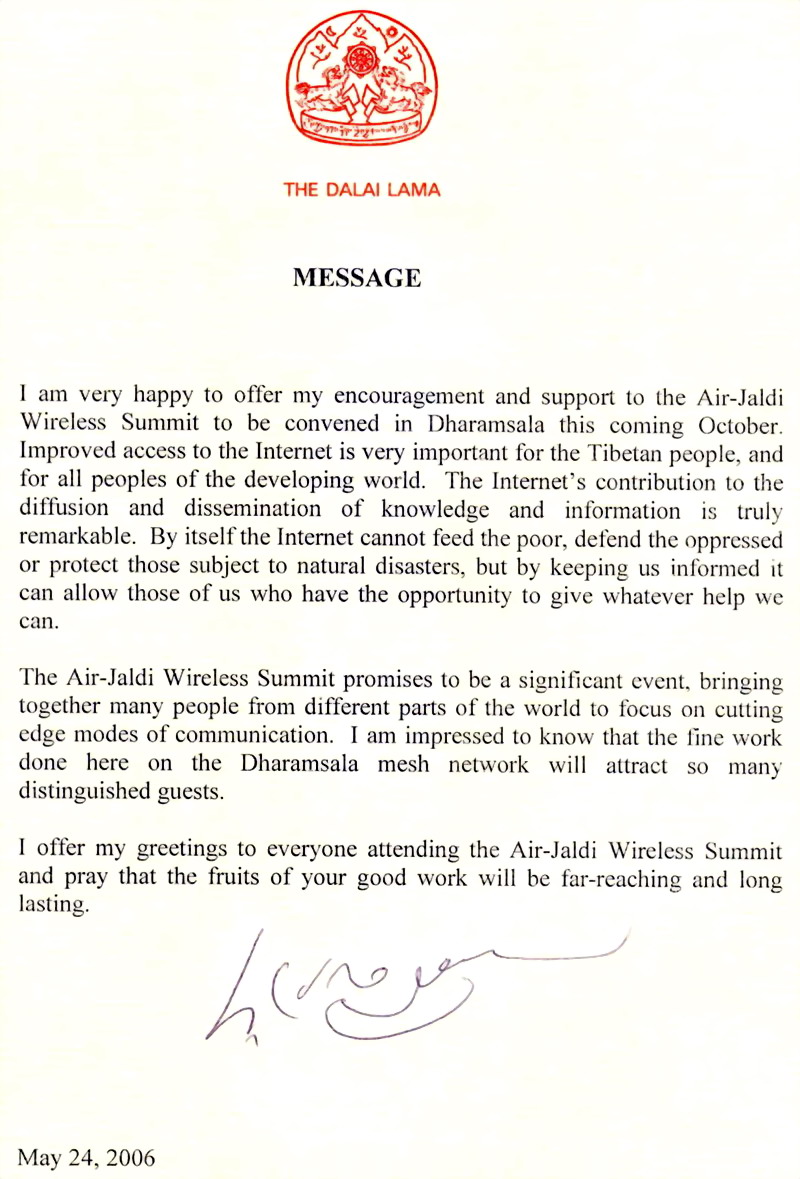 In October 2006 with encouragement and support of His Holiness The Dalai Lama a bunch of over 100 People from around the globe where invited by TibTec to join the Air-Jaldi Wireless Summit in Dharamsala, India. WSFII is a global process. This is because the dream of free communication is a global dream. Today the Tibetan Children’s Village is connected to the global Internet using off-the-shelf wireless equipment and free open source software including meshing technologies. 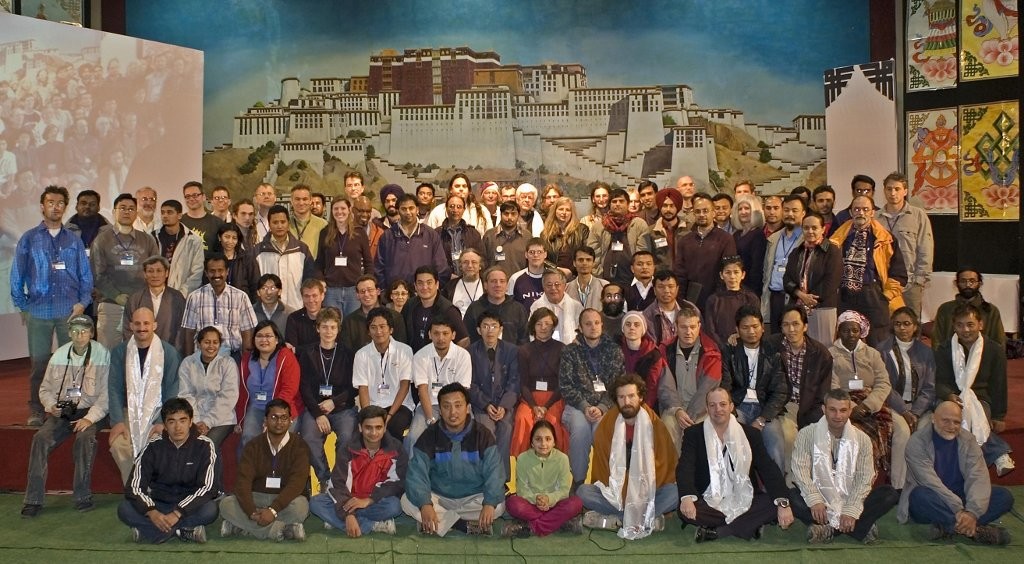 With the code provided by the Free Open Source Software Community from around the world, over the last 5 years we have moved a good step forward towards this vision of mankind. Many friendships have been made on this path with people from many places – my vision of WSFII came true in many ways …

From Open Networks to Open Hardware

While my last days in Daramsala I realized that to really make a shift we would need cheaper and preflashed wifi-routers. Also a change in the distribution channels would need to take place. The routers are produced in Asia, mainly Taiwan, then shipped to Europe or the US and then from there be redistributed to the developing world where they are finally sold for twice the price they were sold in Europe and twenty times the price they were produced in Taiwan.

During Air Jaldi Summit I got to know Joy Tang, a women from Taiwan who had worked for Cisco in the US for many years. And she new some of the key figures of Taiwan’s OEM Industry in person since she was child. Plus she is the head and heart behind the one village foundation. I really felt like sharing a lot with her. On the last day we had a longer conversation about this hardware issue, and then in a moment of total agreement we promised each other to follow this road back to Taiwan and try to change that together. This picture captured our promise, which was witnessed by Gina: 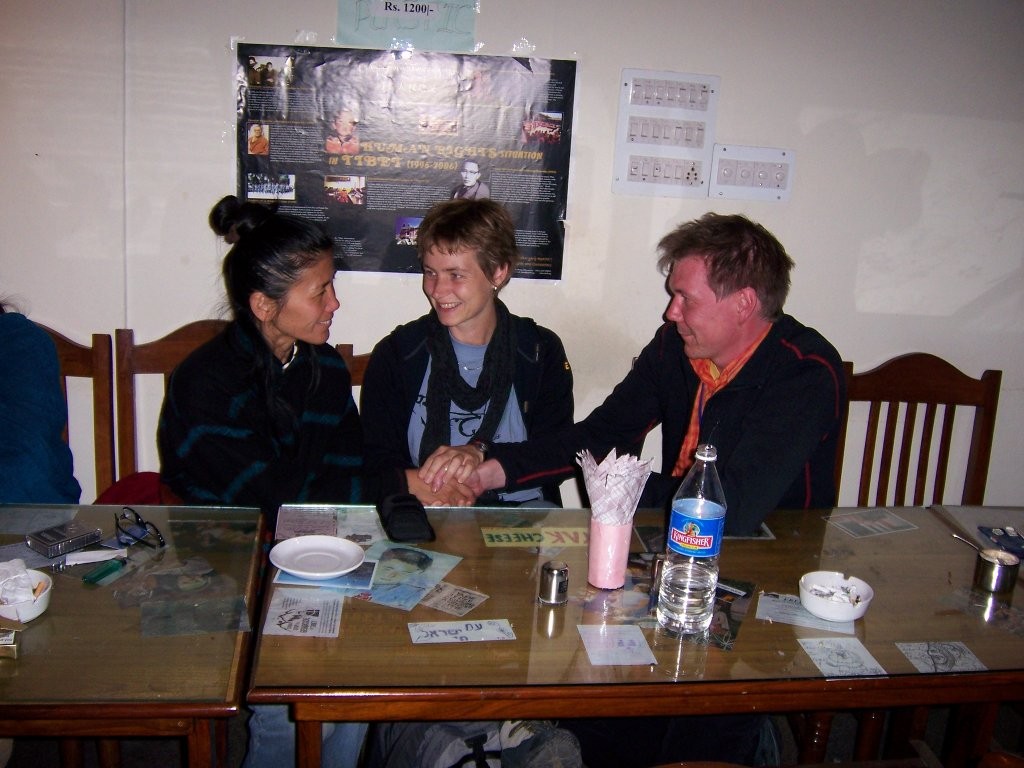